If you’re not familiar with the term “caching”, it just means that when we perform a time-consuming operation, we save (cache) the results so that the next time that operation is requested, we can skip the actual operation and instantly fetch the previously cached results. Shiny’s reactive expressions do some amount of caching for you already, and you can use more explicit techniques to cache the various operations you might do to your data (using the memoise package, or manually saving intermediate data frames to disk as CSV or RDS, for two examples).

Plots, being very common and (potentially) expensive-to-compute outputs, are great candidates for caching, and in theory you can use renderImage to accomplish this. But because Shiny’s renderPlot function contains a lot of complex infrastructure code, it’s actually quite a difficult task. Despite some valiant attempts, all of the examples we’ve seen in the wild have had serious limitations we wanted to overcome.

Shiny v1.2.0 introduces a new function, renderCachedPlot, that makes it much easier to add plot caching to your app.

The diamonds dataset has 53,940 rows. On my laptop, this takes about 1580 milliseconds (1.58 seconds). Perhaps that’s fast enough for doing exploratory data analysis, but it’s slower than we’d like for a high traffic Shiny app.

We can tell Shiny to cache this plot in two steps.

To quantify the performance difference between the cached and uncached versions, I turned each into a minimal Shiny app (source). This app simply provides the color_by input using the new varSelectInput control, and then renders the output using either of the two code examples above. Then I used our (still-in-development) Shiny load testing tools to record a test script, and “replay” it against both versions of the app, each running in a single R process. 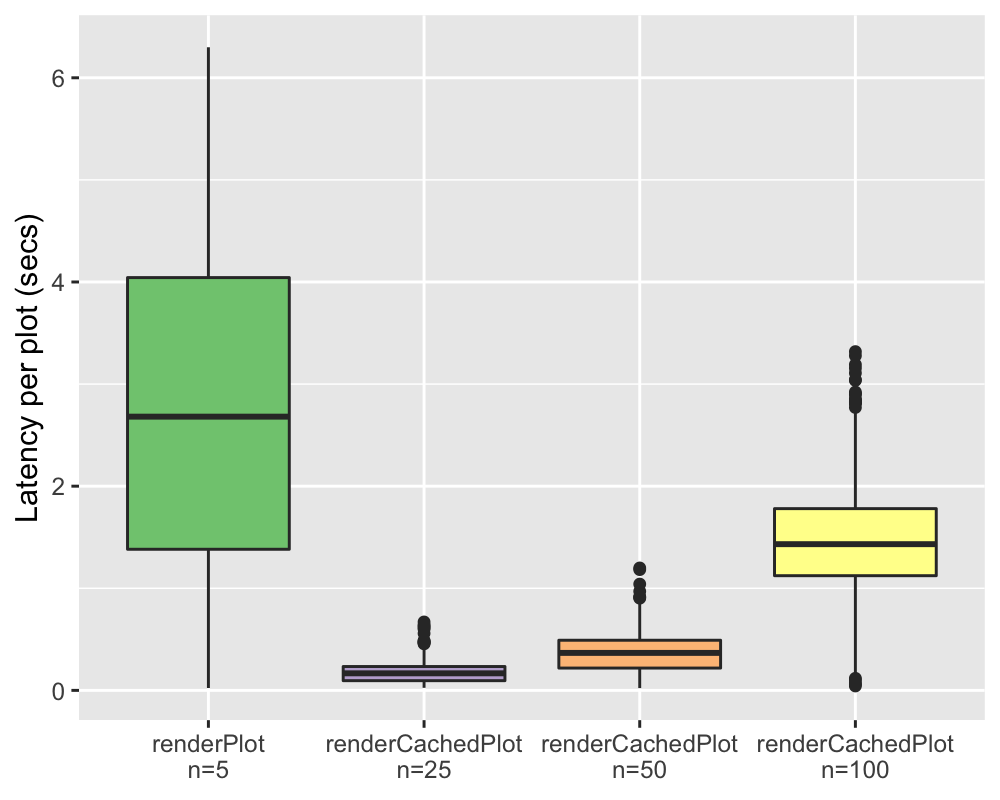 With only five concurrent users, the latency is already pretty bad with the renderPlot version. (Note that this isn’t intended to represent typical performance with Shiny apps in general! We chose a particularly torturous ggplot on purpose.)

When to use plot caching

A Shiny app is a good candidate for plot caching if:

Since our test has a pretty expensive plot as its only output, and our load testing tools simulate n users all doing the same exact thing, this these numbers reflect a best-case scenario for plot caching.

Shiny can store your cached plots in memory, on disk, or with another backend like Redis. You also have a number of options for limiting the size of the cache. Be sure to read this article to get the most out of this feature!

In future releases of Shiny, we hope to build on this foundation we’ve laid to dramatically speed up other areas of Shiny apps, like reactive expressions and non-plot outputs. In the meantime, we hope you find plot caching to be a useful addition to your performance toolkit!

See the full changelog for Shiny v1.2.0 for other minor improvements and bug fixes we’ve made in this release.