We’re busy at work on the next version of RStudio (v0.99) and this week will be blogging about some of the noteworthy new features. If you want to try out any of the new features now you can do so by downloading the RStudio Preview Release.

Previously RStudio only completed variables that already existed in the global environment, now completion is done based on source code analysis so is provided even for objects that haven’t been fully evaluated:

Completions are also provided for a wide variety of specialized contexts including dimension names in [ and [[: 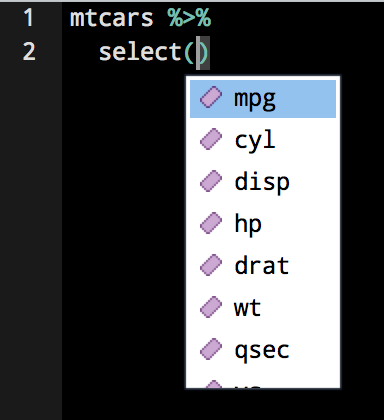 In addition, certain functions, such as library() and require(), expect package names for completions. RStudio automatically infers whether a particular function expects a package name and provides those names as completion results:

Completion is now also S3 and S4 aware. If RStudio is able to determine which method a particular function call will be dispatched to it will attempt to retrieve completions from that method. For example, the sort.default() method provides an extra argument, na.last, not available in the sort() generic. RStudio will provide completions for that argument if S3 dispatch would choose sort.default()

Beyond what’s described above there are lots more new places where completions are provided:

Previously RStudio only displayed completions “on-demand” in response to the tab key. Now, RStudio will proactively display completions after a $ or :: as well as after a period of typing inactivity. All of this behavior is configurable via the new completion options panel:

When within an RStudio project, completions will be applied recursively to all file names matching the current token. The enclosing parent directory is printed on the right: 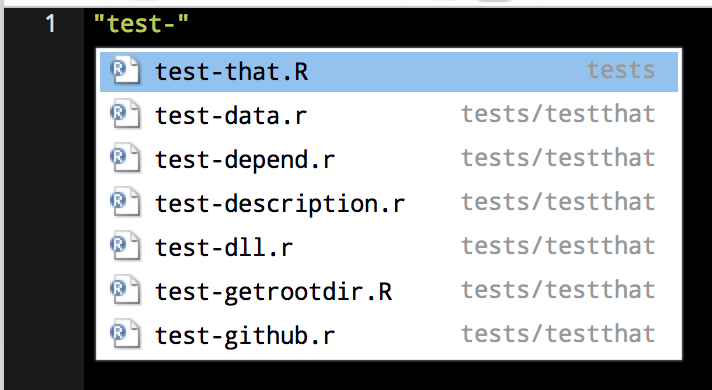 Got a completion with an excessively long name, perhaps a particularly long named Bioconductor package, or another variable or function name of long length? RStudio now uses ‘fuzzy narrowing’ on the completion list, by checking to see if the completion matches a ‘subsequence’ within each completion. By subsequence, we mean a sequence of characters not necessarily connected within the completion, so that for example, ‘fpse’ could match ‘file_path_sans_extension’. We hope that users will quickly become accustomed to this behavior and find it very useful.

We think that the new completion features make for a qualitatively better experience of writing R code for beginning and expert users alike. You can give the new features a try now by downloading the RStudio Preview Release. If you run into problems or have feedback on how we could make things better let us know on our Support Forum.